Is the "SIX DAY" Announcement on the New Superintendent Imminent?

It has now been 3 months since the D181 Board of Education approved the Agreement to Mutually Terminate Dr. White's Employment Contract.  (Source: 10/30/17 Termination Agreement)  Since October 30, 2017, the BOE has hired a search firm to conduct a search for Dr. White's replacement.  The search firm has conducted focus groups with various constituency groups and circulated a survey to the community in order to develop a Superintendent's Profile.

At the January 16, 2018 BOE meeting, the search firm presented the results of their research to the BOE. Two documents were presented to the BOE:  Superintendent Survey Results and Superintendent Profile. The survey results and profile are intended to guide the BOE's decision on who to interview and ultimately hire to lead D181.

According to page 12 of the Superintendent Profile, on January 21 the BOE was to conduct a first round of interviews, followed by a second round on January 27 and 28, culminating in a February announcement of who the new Superintendent will be.  BoardDocs confirms that the BOE met for "Special Meetings" on January 21, 27 and 28, so we assume that they conducted interviews on those dates.  On January 29, the BOE had a Regular Business Meeting and during Executive Session (Agenda Item 2A) discussed personnel.  Again, we assume that they continued their discussions on who to hire.


Further, 5ILCS 120/7.3(c) specifies the information that must be published:

(c) For the purposes of this Section, "total compensation package" means payment by the employer to the employee for salary, health insurance, a housing allowance, a vehicle allowance, a clothing allowance, bonuses, loans, vacation days granted, and sick days granted. (Source:http://www.ilga.gov/legislation/ilcs/fulltext.asp?DocName=000501200K7.3)

Currently, the next BOE meeting is scheduled for February 12, 2018 (Source:Board Meeting Calendar). If the BOE has already picked the next superintendent, by no later than February 7 it must publish information on the compensation package. Unless it buries the information on the website (which would be very NON-transparent), the community will have plenty of time to do their own due diligence on the candidate and write to the BOE if they have compliments or concerns to voice ahead of the vote.

We have reviewed all sections of the D181 website where we believe the BOE might publish the compensation package (Main Page, News, Business Department, Board Docs) and it does not appear to be available yet.  We will continue to monitor the district website and inform our readers as soon as the identity and compensation package is published.

In the meantime, we encourage our readers to review the Survey Results and Superintendent Profile the search firm presented to the BOE.  The results are not surprising in light of the events leading to Dr. White's leaving the district.  Below is a copy of Page 7 of the Survey Results which identifies the qualifications the respondents want the new superintendent to have:

In addition, below is a copy of Pages 5 and 6 from the Survey which identify the most important characteristics respondents want the new Superintendent to have: 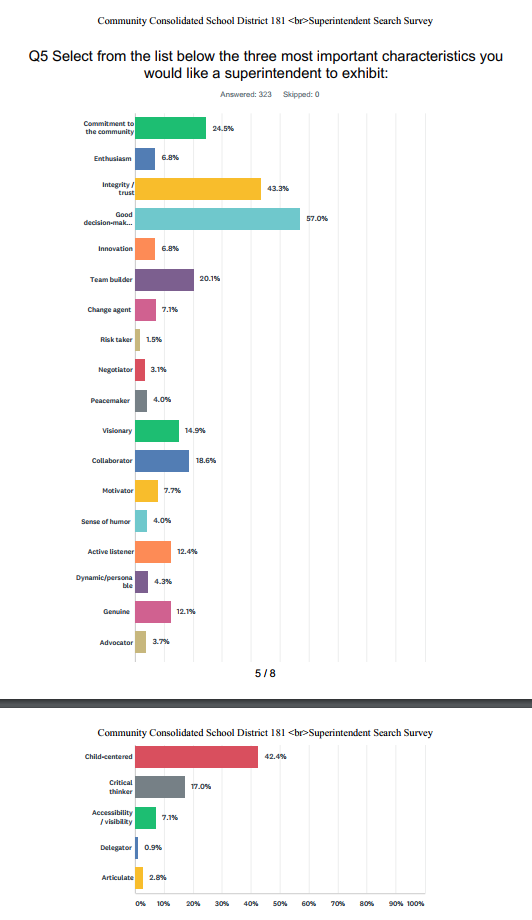 We eagerly await the "SIX DAY ANNOUNCEMENT" and identification of who D181's next leader will be.  Let's hope that THIS TIME, the BOE gets it right!

Until then, we'd love to hear from our readers what they think of the Survey Results and what their expectations are of our elected officials.  So SOUND OFF!

Upcoming Administrator's Departure Provides a "No Brainer" Opportunity for D181 to Reduce the Budget Deficit by $118,000

"Administrator News from the Director of Communications:  Director of Communications Bridgett McGuiggan has announced that she will be leaving the district, with her last day in D181 being February 2, 2018, pending the Board's approval of her resignation as part of the Personnel Agenda at the January 29, 2018 Board meeting.  Please watch for a statement following the Board Meeting regarding Ms. McGuiggan's future plans and information on how the vacancy will be addressed."

We have decided to weigh in on how the Board should fill this vacancy.  IT SHOULD NOT!

With a confirmed $1.5 million budget deficit, that could potentially be $500,000 larger due to the new HMS budget not including line items for needed technology and to move the District Wide Technology Hub to the new HMS, the district can ill afford a Director of Communications.

Let us remind our readers that Ms. McGuiggan's current annual BASE salary is $96,370 (excluding insurance and retirement benefits).  Source:  4/17/17 Personnel Agenda.   The district website has not posted the 2017-2018 comprehensive Salary and Benefits report, so we cannot report what her current total compensation package is.  However, the district website has posted the 2016-2017 Salary and Benefits report which shows her BASE salary as $92,663, and insurance and retirement benefits as  $21,631 for a total compensation package (excluding the "value" of 20 sick days and 20 vacations days (over and above national holidays off) of $114,294.  (Source:  https://www.d181.org/uploaded/Departments/Business_and_Operations/Financial_Reports/Salaries_Benefits/Salary_Benefit_Report_2016-17.pdf)

Assuming her insurance and retirement benefits have not gone down this year, her current compensation package is worth AT LEAST $118,001.

It seems to us that now that the HMS referendum has been approved and the district's taxpayers are no longer getting bombarded with fliers and mailings marketing the bait and switch project, there is really no reason to employ such a highly compensated Director of Communications.  The Board of Education is about to be tasked with approving over $1.5 million in BUDGET CUTS.  The decisions on what to cut will be tough. The Board should now ask what exactly Ms. McGuiggan's current job responsibilities include that cannot be performed by other existing administrators, assistants to administrators and administrative secretaries?

In our opinion, at a minimum,  the BOE should make the short term decision to NOT FILL THIS VACANCY and then further explore the real need for a Director of Communications with whoever is hired as the new Superintendent.

Once the new superintendent is hired, he or she must work with the Board to eliminate the $1.5 million plus budget deficit.  As parents, former D181 parents and district taxpayers, our expectation is that not one penny should be cut that will have a direct impact on our students UNLESS that cut is absolutely needed to balance the deficit and NO OTHER CUTS are available. We expect that whoever the Board hires as the next superintendent will not only agree with us, but will find a creative way to COMMUNICATE with parents and taxpayers WITHOUT employing a Director of Communications!

Eliminating $118,001 from the deficit by not hiring a new director of communications is a NO BRAINER!

Now the only question is whether the 7 seven board members (or at least 4 of them) will use their very intelligent brains and come to this same conclusion!

STAY TUNED AND SOUND OFF!
Posted by The Parents at 2:58 PM 10 comments:

Tuesday night we listened to the 1/16/18 Board Meeting Live Podcast.  We hadn't done this in a while, but after glancing at Board Docs, we were troubled to read two documents that seemed to suggest that the $53 million dollar budget for the new Hinsdale Middle School does not include over $530,000 in needed Technology Funding.  This UNDERFUNDING is not just technology funding for HMS, but funding needed to move the current Fiber Optic Cabling and Hub for the entire district from the old HMS to the new HMS.  Without this hook up, the entire district will be negatively impacted.

We urge our readers to do 3 things:

3.  Write letters to Dr. White and the Board of Education DEMANDING accountability for this latest fiasco.

The following is a very brief summary of this latest mess.  We are disgusted by this information, but even more disgusted to see that the local paper so many residents rely upon for "news" -- the Hinsdalean -- didn't publish a story exposing this (at least not as of the writing of this post).  We have decided that it is not our job to spell out all the details for the entire D181 community.  Rather, we are only going to provide a framework and links to allow our readers to gather the facts on their own. If our readers choose not to do so, then so be it.

What we learned is that over $530,000 in NEEDED technology was NOT budgeted into the $53 million HMS referendum.  This technology includes $180,000 needed to move the DISTRICT INTERNET HUB (our words to describe the Fiber Optic Cabling that runs from HMS to all 9 schools) from the OLD HMS to the NEW HMS. In addition, $285,000 is not included in the budget for Network Equipment and Installation and approximately another $60,000 is not included for needed technology equipment.

During the board meeting, the 6 members who attended (once again Marty Turek was a no-show), all expressed concern about this underfunding of the HMS budget and asked many tough questions about how it was possible that the new building budget excluded the technology that is needed to run the entire district.  Some board members rightfully pointed out that taxpayers ASSUMED when they voted for the new HMS that it was an "all in" project and that at a minimum, the new HMS would contain the same services and items that the old HMS has.  Further, other board members pointed out that it is troubling that as the project has rolled out, the Board has been asked to ADD things to the budget, such as a fitness center and larger basement, and have been asked (but didn't approve) "extras" such as adding back the running track and using expensive tile flooring.

We should all recall that the original Cordogan Clark (the architect's) design budget was $47 million, but when costed out was over $70 million.  The board then directed them to come back with a cheaper design, and things like the running track, auditorium and turf field were eliminated to bring the cost down.  At that time, the community was not aware that in addition to these items, operable windows were also eliminated and the HVAC system was downgraded.  After the project started, some of these items were identified as being needed and were added back. To our knowledge, at no time was the BOE or community told that the budget would not cover NEEDED TECHNOLOGY.  It remains unclear whether this was not budgeted in the first place, or was stripped out during the attempt by Cordogan Clark to lower the cost of the building.

In a nutshell, and in our opinion, there may have been another HUGE BAIT AND SWITCH tactic perpetrated on District 181 taxpayers.  The first questions that need to be answered are WHO IS AT FAULT and WHO NEEDS TO BE HELD ACCOUNTABLE?

Additional questions that need to be answered are:

1.  Did the HMS design budget EVER include the NEEDED technology?
2.  If not, why not?
3.  If yes, when was it stripped out, who authorized it and who in the District knew about it?
4.  Why was the BOE not told about this until NOW?

The most important question, of course, is HOW WILL THESE TECHNOLOGY NEEDS BE PAID FOR?  By now everyone knows that due to capital needs at the other 8 schools not having been budgeted for in the last few years, the district will now face a $1.5 million deficit and CUTS ARE COMING that may impact our children's education.  The latest on this can be found at 1/16/18 Superintendent's Report.

It is clear from the comments made by some board members, that the district CANNOT AFFORD to pay for the HMS TECHNOLOGY NEEDS from the district budget, since this would grow the projected deficit and increase the cut list by another $530,000.  So something will have to be cut from the HMS budget.  Will it be NEW furniture? Will it be HIGH END FINISHES?  We don't know and neither does the Board at this point.

What we do know is that SOMEONE needs to pay for this underfunding and the BOE needs to conduct an immediate investigation to determine who is responsible.

We hope the BOE will report their findings to the community at the next Board Meeting.

Until then, SOUND OFF here and by writing the BOE and Dr. White letters expressing your opinion on this issue.