The Spin Cycle: Scrubbing the Stains From D181 Double Speak

Now that we have recovered from the antics of last Monday’s BOE meeting, we are providing our readers with several areas of concern. It was difficult to select only a few. We encourage you to listen to the podcast on the D181 website so you can hear the meeting in its entirety. (Click to open podcasts link.) As you listen, keep in mind that Dr. Schuster and her administration felt it was necessary to give 90 minutes of meeting time to three outside presenters before hearing the voices of the 11 parents who stepped up and made public comments regarding the state of their children’s education.

Here are some concerns:

·               As we predicted, Dr. Schuster and her administration did promote the ROE presenters as a diversionary tactic. However, the presenters appeared to be duped: their focus was on social justice and special education, not the D181 Learning for All Plan (LFA) specifically. Frankly, we were embarrassed for the ROE speakers, who obviously did not realize the quagmire they stepped into. Kurt Schneider (Assistant Superintendent for Whatever), attempted to lead these speakers in agreement with the strategy he has promoted through the LFA plan (listen to his questions and the comments made by Madeline Will starting at time 26:29 of the Podcast).   While Schneider tried to steer Ms Will’s answers, at one point she stated she was not comfortable answering the questions he was raising, which we should be hearing from Schneider, who in our opinion also has no qualifications outside of special education to be making educational decisions about our children.

·                Parents were also able to hear that D181 is a “pioneer” in its quest for social justice, automatic math grade level acceleration on top of the Common Core requirements, and full inclusion for all within the backdrop of falling ISAT and MAP scores; meaning, no district, at no time, and no place, has undertaken these sweeping changes and practiced them with success. And yes, despite the fever pitch of Schuster’s “celebrations,” the fact is that even with three schools trending slightly upward, their rankings are still down from years past, while the remaining district schools are headed on a downward slide. The numbers don’t lie.  Is this what Schneider means when he says, “We will raise the floor to raise the ceiling?”

•                Even more concerning was the comment Schneider made regarding the district’s minority population, which he stated was 21%. According to the Illinois State Report Card for 2013, the minority population is actually 19%; this figure comprises different ethnic groups, people of color, etc.

The performance by ethnic group is highlighted within the State Report Card. (Click to open interactive Report Card link.) 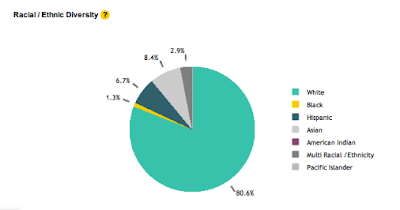 It’s obvious the highest achieving group is Asian, which is why Schneider’s public comment at last Monday’s meeting is so confusing (at time 1:12:50 on podcast) :

Does this make logical sense to you?

We know this ethnic group excels in academics.  We know the Asian population is proud of their achievements. We all are. What does this have to do with social justice within D181? 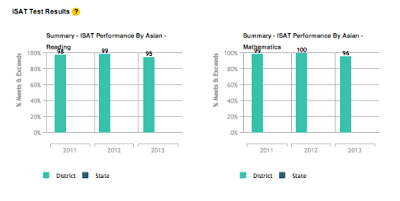 What Kurt Schneider should be reviewing more carefully is the growth of the students of low income/poverty.  Research is very clear on the effect of poverty on achievement. In our opinion, Schneider wants us to believe 21% of the population of 181 is struggling because they are a minority group. This is untrue.  He should also be focusing on the only number that matters in terms of achievement, that of the low income population.

Since Schneider was hired to focus on Special Education, he should be more focused on the performance of special education students, with only 50% of students with IEPs meeting or exceeding standards in reading and 54% in math. Isn’t this what he was hired to lead? Shouldn’t he be looking at data for the area in which he was hired instead of making generalizations to the entire student population?

Bottom line:  Parents must remain vigilant, vocal and engaged as the double speak continues from the administration and Schuster’s closest BOE supporters: Turek, Yaeger, Nelson, and Clarin. We did not move to this district to be “pioneers.” Did anyone ask you if this is what you wanted for your children? We need to ask why the district is making the decisions for us and why the Learning for All Plan is being originated and led by Schneider, someone who does not have the background. And our children should not be used for experimentation, especially when the main purpose appears, in our opinion, to be for personal gain.
Posted by The Parents at 8:58 PM

I can not access anything. Please reference the name or topic of the video so I can look it up on You Tube.

I find the comments made by Dr. Schneider to be shocking. Even more shocking is the fact that the school board sat back and said nothing while these comments were being made. What is wrong with all of these people?

The name of the YouTube video is "TN Student Speaks Out About Common Core, Teacher Evaluations and Educational Data."