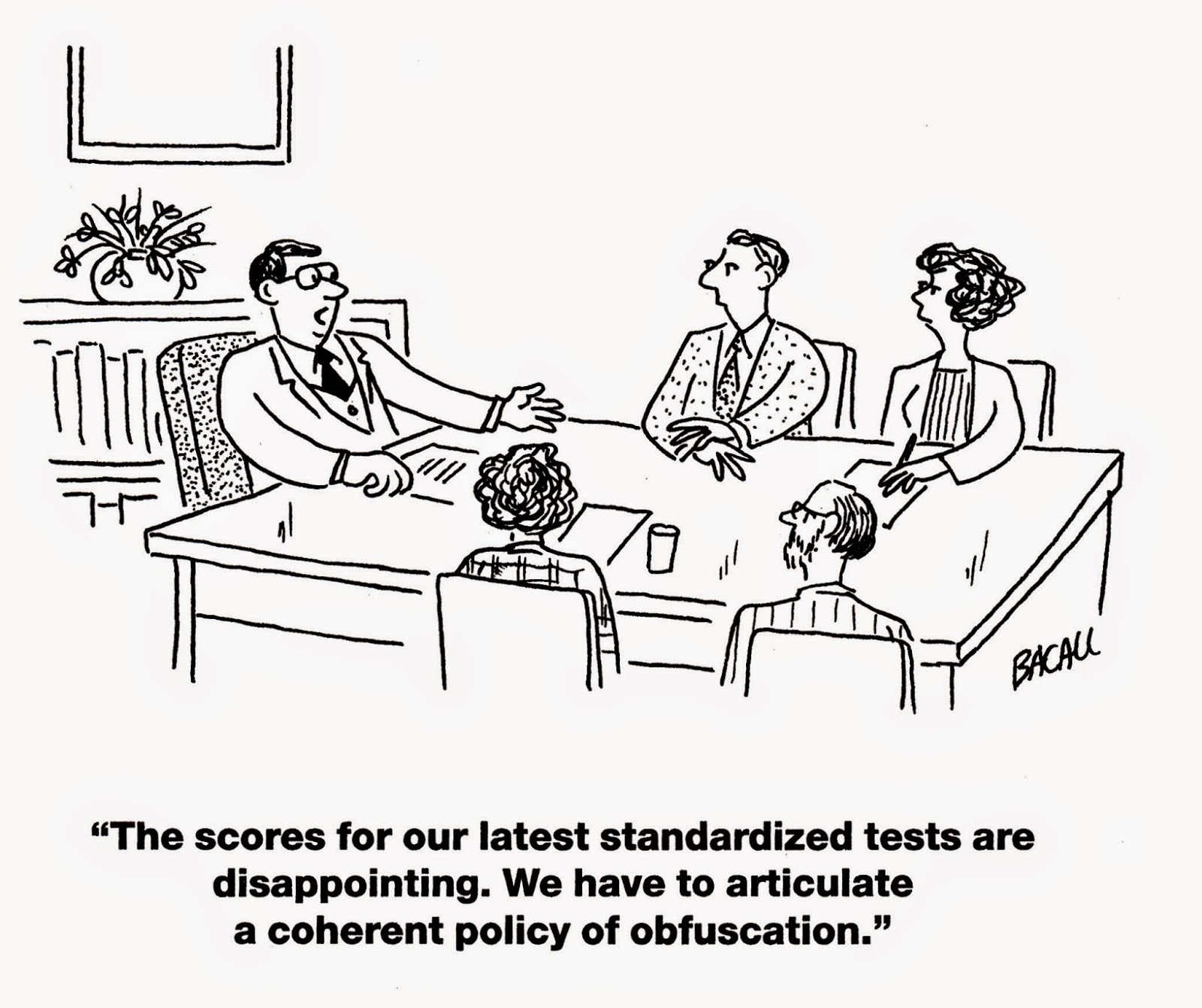 This evening we received the comment we have published below.  It raises serious concerns about  last Spring's ISAT and this Fall's MAP data that has finally been reported on board docs for Monday's (10/6) BOE meeting. The data reports can be found at the following link:

After reviewing the material ourselves, we feel compelled to publish this comment as a free-standing post because as the commenter aptly states:  "It is obvious that the report was intended to obfuscate the true state of affairs in the district."

Neither Dr. White nor the BOE must ignore the negative data or the questions it raises.  If they do, they are not doing their jobs.

Board docs is posted for Monday's BOE meeting. It is going to be a study session starting at 6:30pm. It is unfortunate that the BOE meeting is at the same day and time as the contentious D86 BOE meeting.

The reports on board docs contain ISAT data and fall MAP data. I just attempted to review all of the data, but my eyes quickly glazed over. There is too much data (328 pages worth!), but in the end it all really says nothing at all. It is obvious that the report was intended to obfuscate the true state of affairs in the district.

Where is the science ISAT data? We did very poorly in that area last year. So, how did we do this year?

Cohort data is great, I am so glad that we are analyzing it - but it should be by school otherwise it is meaningless. We all know our schools are performing VERY differently. Remember, Oak ranked 15 last year, whereas Monroe ranked 109. Aggregating the data by district paints a very inaccurate picture. Also, we need to review quintile data by school. On the whole though, the highest quintile is showing the lowest growth. Inclusion is really working well for those advanced learners!!

The ISAT data and MAP data show that our schools are still performing very differently. Prospect, not Oak, is the new star. Madison, Waker, Elm, Monroe - not so much.

Oak's 5th grade class made about 80% growth in math as 3rd graders. This year they made about 20% growth. We need to analyze why this happened.

Growth in this year's 5th grade class for math was the lowest in the district across the grade. And remember, 1/4 of the students in that grade were tutored by the district after school last year, in addition to many parents who tutored their kids outside of school. Imagine what the scores would of been without the extra tutoring?? Schneider - looks like YOUR compacting experiment was a brilliant success. You were the one who foisted math compacting on us - you brought it to us from your former district. And wasn't Schneider the one who told us ALL last year (and the year before that) that acceleration has the biggest impact on student achievement? Maybe White or someone on the BOE should point out the obvious - that Schneider has egg on his face.

Where is the fall MAP data for our second graders?

Lane had relatively high projected growth compared to the other schools. Could this be because the Lane still has tiers on the QT, while everyone else is stuck in inclusive classrooms?

So many questions! I could come up with more, but I cannot bear to bring myself to look at the 328 page tome any longer."

Bravo! This one short, concise comment has more analysis than the hundreds of pages on board docs.

I just clicked on the links to the reports. Thanks for posting this. It is pretty obvious that Benaitis was hiding behind Kevin Russell all last year and now we have no one in our top heavy administration who can analyze data.

Message to Don White: The fifth grade test scores are a result of the misguided Learning For All plan and full inclusion. These students have been in this experiment for two years and we now see the results. Dismal. And you have stamped your approval of this plan and Kurt Schneider? You now have no evidence to back you up.

Absolutely on point! Too bad most D181 parents will be at the D86 meeting tomorrow night. The last time we had MAP results like this 150 parents showed up to the meeting with questions.

I wonder if Oak's scores are the lowest because they didn't receive any of the district provided tutoring last year?

I think Oak's fifth grade low growth can be attributed to a combination of factors, including:

1. They were the only school that did not participate in the after school tutoring. This affected growth on the lower end of the bell curve.

2. Before winter break, all of the schools except Oak went back and retaught their students fourth grade math concepts that were skipped with the acceleration model. They did this because children were failing and falling behind. Oak did not go back, but instead starting on fifth grade math months before winter break.

3. The kids at the top did not reach their growth because everyone had to move at the same pace - because of the inclusive model. Everyone ended at 5.6. In years past, the advanced class would have ended at 6.0. This stunted their growth.

4. They had 5 teachers over the course of the year due to a maternity leave issue.

Question is - why do I have to be the one to analyze this????

11:01: In answer to you question -- you have to analyze it because there is no administrator in D181 who has the qualifications to do so. The last assessment expert D181 had was Dr. Bonnie Strykowski and her position was cut by BOE majority vote (5 to 2, as I recall) the first year Dr. Schuster was the superintendent to help balance the budget. When the district realized they needed an assessment administrator to analyze data, instead of hiring someone with training and expertise, they promoted Mr. Kevin Russell from his principal position at Walker School to Director of Assessment. Less than one year later he was promoted to Assistant superintendent of Learning and Ms. Dawn Benaitis was promoted to be the Director of Learning and Assessment from her principal position at Monroe School. Now there is not really anyone in charge of assessment as everyones titles and job descriptions keep morphing. The BOE should ask Dr. White tomorrow night whose job it is now to prepare, analyze and report on the assessment data. Someone needs to do the job and do it right. Those who don't do it right should be terminated for cause or not have their contracts renewed.

FYI - the BOE meeting tonight is at WALKER school at 6:30 pm

Dr. White is still on his honeymoon. But time is running out. Since starting on July 1, he should have taken advantage of the good will and trust he had with the BOE and community to effect productive and necessary changes in D181. He should have looked over all of the programs and data that either supported their continuation or elimination. Rather than just undertake a paper "process" review and then "tweaking" a program -- Learning for All -- that has morphed over and over again in the last 3 years, he should have ended. He should have gotten rid of the name. No one will ever really trust it, especially after so many changes. In addition, he should have determined who to hold accountable for the poor performance at schools, such as Oak's 5th grade. No excuse making. No stating that the scores are just one data point. The plain facts are that Learning for All must be dismantled and the administrators who introduced it to the district and tried implementing it, should leave. If Dr. White really wants to be successful in D181, he needs to act now. Our students can not afford another wasted year.

NO ONE read the data wrong. This year's fifth graders (not 6th graders) have been compacted since third grade. We all read the fourth grade scores from last year. And yes, there is no fall to fall data for the second graders, but it is the administrations responsibility to report all fall MAP data. They chose to do it in a fall to fall format. That's fine, but then the second grade fall scores should be reported separately.

I completely agree with 1:00. The facts remain that the fifth grade's scores are lower than ever and that the schools which did not participate in after school, district sponsored tutoring last year in 4th grade scored lower than anyone. Thank God parents and teachers asked for tutoring and that the administration agreed that it was necessary. The administration would never have approved the tutoring without seeing the disasterous performance from children that year.

Other neighboring school districts, who were given the same directives to follow the CC did not have their scores drop as sharply as 181.

The unwanted, unnecessary, and unapproved pilot experiments on our children's educations these last few years have hurt our children and their scores. Whatever data you look at supports those facts. Just wait until Madison and Monroe's scores come out next year. There will be even more poor data,