Connect the Dots: McCurry NOT a Team Player 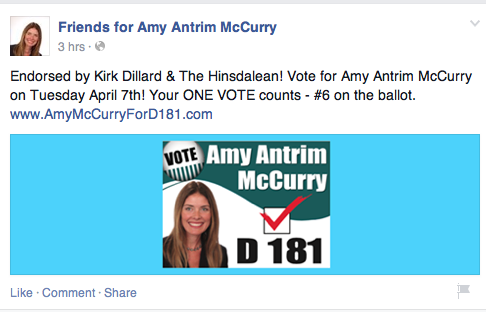 Yes, it's true.  Straight off of McCurry's facebook page that she has created for the D181 election, she is suggesting that everyone either only has ONE vote to cast tomorrow or should ONLY cast ONE vote.

Thanks Amy for showing your true colors on the eve of the important election of FOUR D181 Board of Education Members.

We are sure there will be a quick scramble by her "friends" to explain away this FaceBook post and argue that it doesn't mean what it says.  But we parents in D181 are NOT STUPID or NAIVE.  We know that this is exactly what Amy wants -- she wants all voters to only cast one vote, so as not to dilute her votes with those cast for the other voters.This type of campaign tactic, in our opinion, proves she is selfish and only cares about herself. In our opinion, this proves she is not now and will not be a Team Player if elected.

This latest Facebook post is just the latest DOT that the educated voters in D181 should connect before heading to the polls tomorrow.  Let's look at the rest:
1.  Her refusal to publicly address (AS IN HER OPENING OR CLOSING statements made at TWO debates) her CONFLICT of interest.
2.  Her convenient, yet "unapproved" resignation.
3. The lack of job vacancy on the D181 website.
4.  Her statement to the Hinsdalean that she is looking forward to learning about the tax levy process after her election and yet her revelation on her Facebook page that she has been meeting with Gary Frisch to learn about the district's finances - an interesting (and let us say another example of a conflict) expenditure of taxpayer money since he is salaried and no doubt has been meeting with her while "on the clock." Here is what she says on her Facebook page Q&A: "I have spent multiple hours with our Assistant Superintendent of Business and Operations, Gary Frisch, to gain further insight and knowledge of our finances." Has he offered or given time to the other candidates?  Or is an example of an administrative "favor" as a result of her employment status and their obvious desire to have her on the BOE?
5.  The convenient absence in the Clarendon Courier of the MANY letters that were submitted to it supporting the other candidates (that were published in all of the other local newspapers), and yet the full column the Courier ran by her husband in which he supports her.
6.  The  "interesting" representations made by at least one person who has publicly endorsed her about her D181 job that apparently involves designing students' educational plans, something we find shocking if true, since she is not a certified employee of the district nor is she an administrator or teacher.  It makes us wonder exactly how Dr. Schneider is running the Special Ed portion of the Department of Learning since we have heard parents make public comments recently criticizing how their children's needs have NOT been properly addressed by D181.

It is a real shame that rather than encourage all D181 voters to casts FOUR votes tomorrow -- as all of the other candidates (except for Mr. Turek) have publicly done, either during the debates or their various websites and Facebook pages--she has turned her back on the very people she will have to work collaboratively with IF she is lucky enough to be elected.

On April 7th Vote for the FOUR CANDIDATES with integrity, who by their campaign actions have PROVEN that they are willing to support and work with each other:  BURNS, GILTNER, GRAY and CZERWIEC.

In addition, let's not forget our highly paid superintendent has not pushed the dolts on the BOE for a vote on McCurry's "resignation." Why? Because White, Schneider, and his employee, McCurry all support their fantasy failure L4A.

Is this really what D181 voters want to elect?

This is from the Courier Debate where Amy had written out answers in paragraph form that she brought with her to the debate. At the start of Amy’s statement at the 1:42:55 mark, she says that her #1 attribute is an “educator’s mindset”. That’s scary. Check out the capitalized text (below). It occurred at 1:44:25.

As Amy so eloquently stated:
“What needs to happen in that classroom is to provide the right kind of resources; the resources of technologies so that you can meet the different needs of your learners and you can um have that learning style of each individual person excel to its greatest potential...I I my opinion from that perspective is that our children when given the right resources are able to excel even the highest learner when taught appropriately and given the right tools they are going to meet their their growth potential and ALSO THE CHILDREN IN THE MIDDLE OR ON THE LOWER SPECTRUM IF YOU BRING THOSE SERVICES INTO THE CLASSROOM SO ALL CAN SHARE ITS MORE COST EFFECTIVE THAN HAVING A SEPARATE PROGRAM FOR ANY ONE OF THESE CHILDREN. So I am very excited about the future of our education….”

I’m glad she thinks an “educator’s mindset” is what it takes to be a decent member of the BOE. Personally, I think it is disgusting that a Dept of Learning employee and a so-called educator is espousing notions that are a violation of state and federal special education laws.